Alberto Ravasio, an aviation enthusiast, tells us about his experience flying with Albastar!

The Covid-19 pandemic has virtually brought the world to a halt. We have all had to change our habits profoundly and give up many things, including travelling.
Our “normal” up until last February, that is, catching a plane to travel to holiday destinations, to go on business trips or purely to re-embrace our loved ones became impossible at first, and then very difficult.

Airlines and airports have implemented all the necessary protocols to ensure healthy environments and social distancing, both at the airport and during flights.

We invited Alberto Ravasio on board one of our planes to experience and provide an account first hand of how safe air travel is. Here is his experience.

This is how Alberto’s trip began:

I left well in advance to go to Milan Bergamo airport. The flight was scheduled for 5:55 pm on Saturday, and I had just one piece of hand luggage with me. Upon arriving at the airport, I headed towards door number 4 of the terminal entrance.

As soon as I stepped into the airport terminal, my temperature was checked by a thermo scanner, while my flight to Lampedusa was already displayed on the departures board. After checking the details, I made my way to the check-in desk. 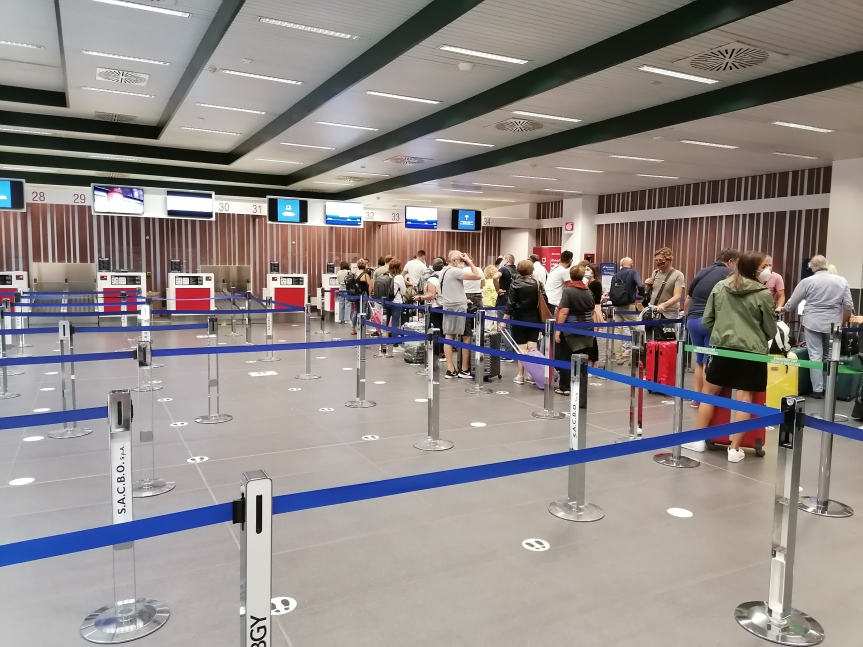 There was already a queue of people, but it was moving along in an orderly manner, with everyone respecting and maintaining the safety distances indicated on the floor with special stickers.
With my boarding pass in my hand, I reached the security checkpoint, where controls were taking place implementing physical distancing measures correctly.
The terminal was not busy, a sign that people are still wary of flying. What a difference compared to 2019!
Walking along, I could see the gate number assigned to flight AP403 on the information panels: gate A8. Before embarking, I savoured a good coffee accompanied by a fragrant ‘cannolo’ pastry, an ideal way to sweeten the wait, and enjoyed the panorama of the Prealps from the terminal windows, even though the sky was overcast. 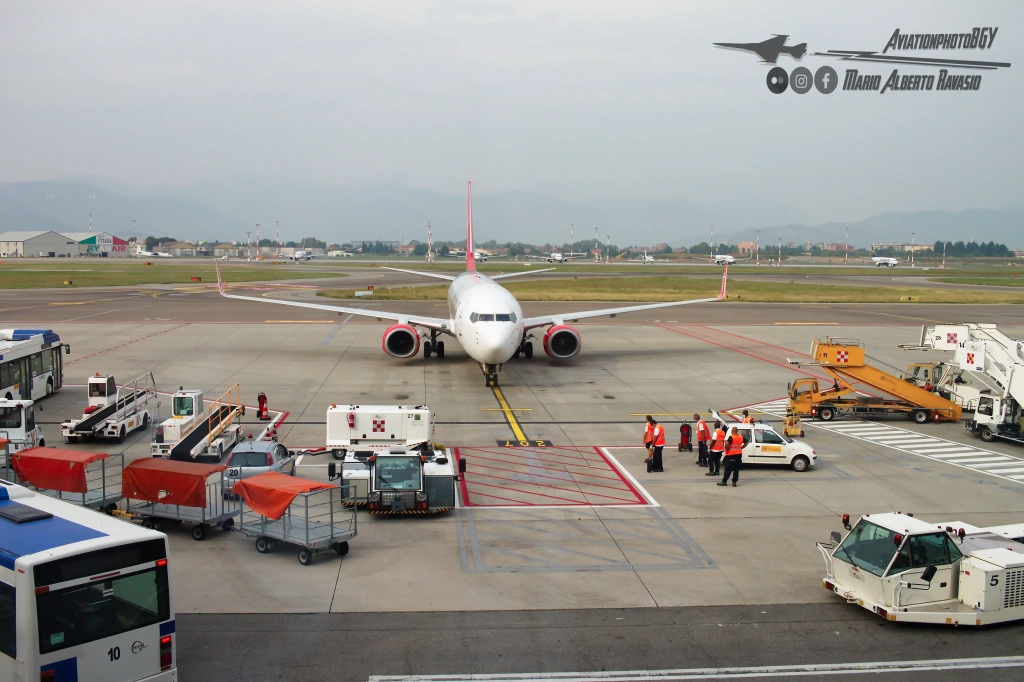 The plane arrived and, after turning off the engines and the beacons, the workers supervised by the ramp agent, blocked the landing gear wheels with chocks, delimited their work area placing cones at the ends of the plane and then positioned the necessary equipment (stairs, baggage belt, generator, etc.).
The ramp agent spoke with the head of the cabin crew, who opened the aircraft door and then after a quick exchange of documents, began disembarking passengers.

The new crew arrived with its Commander Federico Vezzani, who took his place on board while the plane was being prepared for its next flight to Lampedusa. The craft was refuelled, the cabin was cleaned and sanitised and the passengers’ luggage stowed.

Boarding began on time and, upon completion, the pilot got ready for pushback! 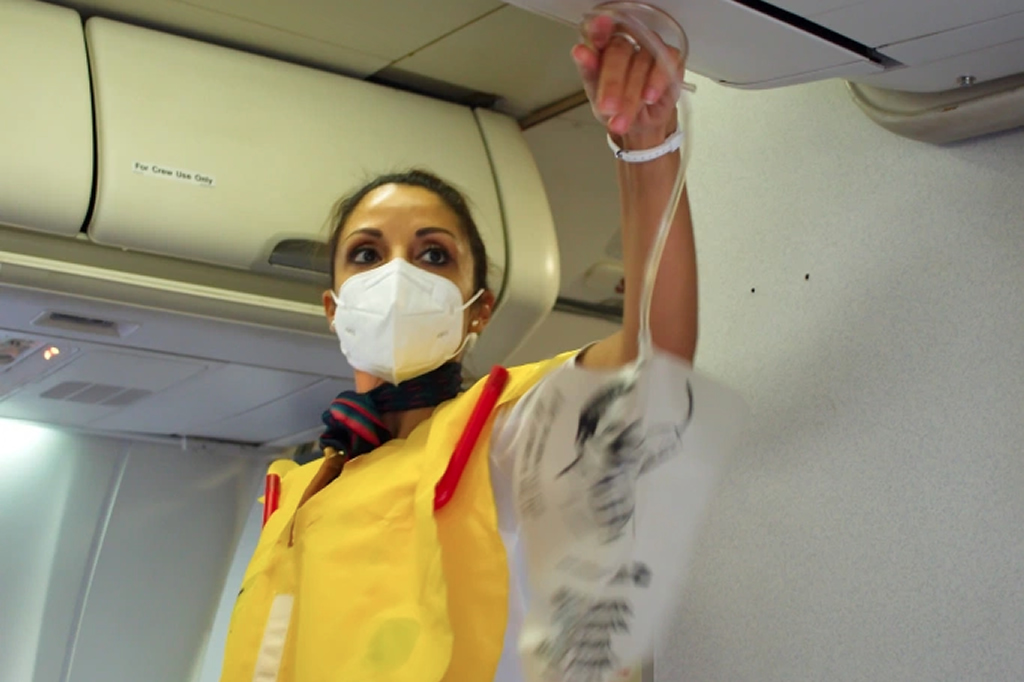 The engines were powered up one after another while the flight attendants performed the safety demonstration and after a brief taxiing, the take-off phase commenced. The flight was due to last an hour and a half in total, following a route over the Island of Elba, the Tyrrhenian Sea, and Trapani in Sicily, before descending to our destination. 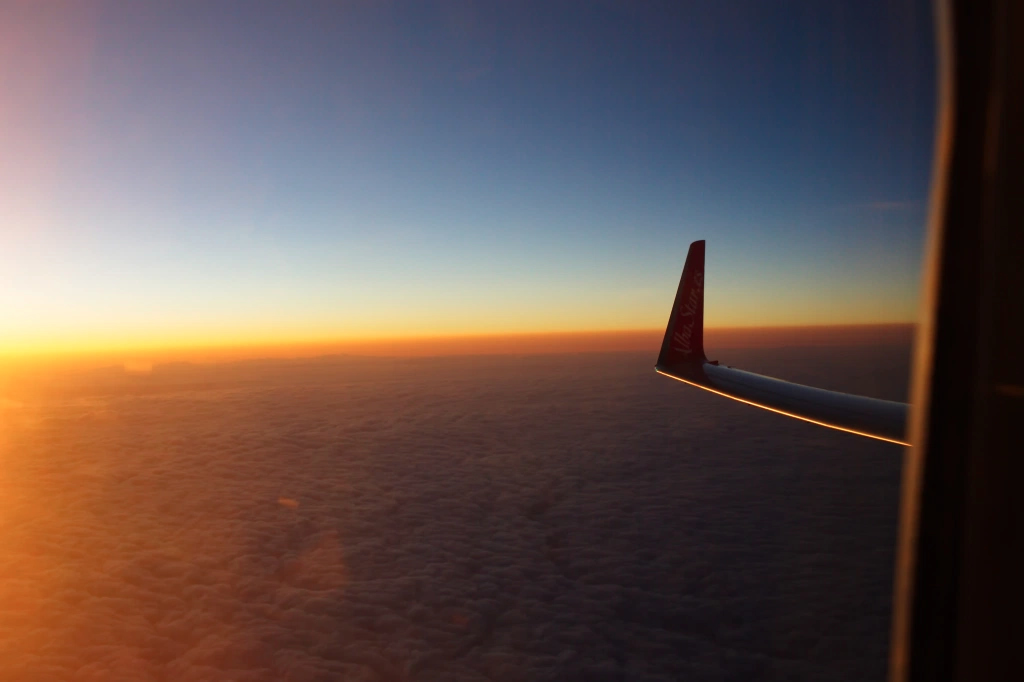 The sky was slightly hazy, but the view at 35,000 ft was beautiful and the sight of the sun setting was like a picture postcard.
After about 25 minutes, the flight attendants began the on-board service, which was performed very carefully albeit being shorter than usual. All passengers on-board complied with anti-covid regulations, wearing masks, use hydroalcoholic gels frequently and respecting safety distances. 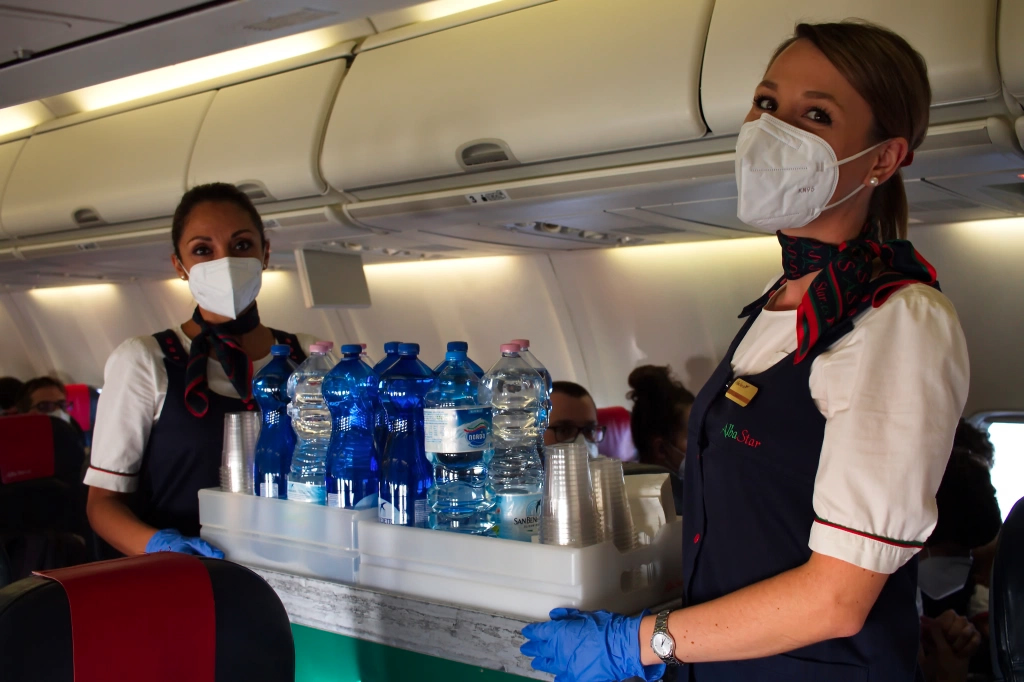 Approaching a flat, calm sea, a glimpse of the island came into view: a patch of land in the middle of the Mediterranean Sea.
With a steady hand, demonstrating his experience, Commander Federico Vezzani landed the plane on the ground and the plane immediately reached its parking space.

Upon our arrival, the airport was empty and we disembarked quickly following the airline’s procedure providing for disembarking line by line as announced by the head of the cabin crew and flight attendant at the back of the craft.
Afterwards, cleaning and sanitising staff set to work to make the next flight safe.

We began boarding our return flight to Bergamo at 8:25 pm. There were roughly 150 people on board the plane and, as always, the crew went from row to row making sure that everyone was wearing a mask and had their seat belt fastened.
The plane taxied onto runway 08, backtracking to the end of the runway. The return flight lasted an hour and forty minutes, following a similar route to the outbound flight, at a slightly lower altitude of 34,000 ft.
The on-board service began about half an hour after take-off, and the flight attendants offered soft drinks.
The atmosphere on board was calm and passengers sat in accordance with anti-covid regulations.
At 9:50 pm, the sign indicating to passengers to fasten their seat belts lit up and a short announcement from the cockpit was followed by an announcement from the head of the cabin crew informing us of the start of our descent to Bergamo, where we would land in about half an hour.
Looking outside the window, I observed the contrast between the city lights and the darkness of the overflown areas, creating a pleasant atmosphere. After a gradual and precise descent and a left turn, we lined up with runway 28 at Orio al Serio airport.
Touchdown was smooth, we slowed down gradually along the entire length of the runway and then taxied to our parking place. It was 10:15 pm! Here a bus awaited us to take us to the terminal building, where my flying experience with Albastar ended.

We would like to congratulate Alberto Ravasio for his delightful account and also thank all our staff at Albastar and the airport teams who work and collaborate every day to make your flight experience flawless.
We look forward to having you on board again soon!